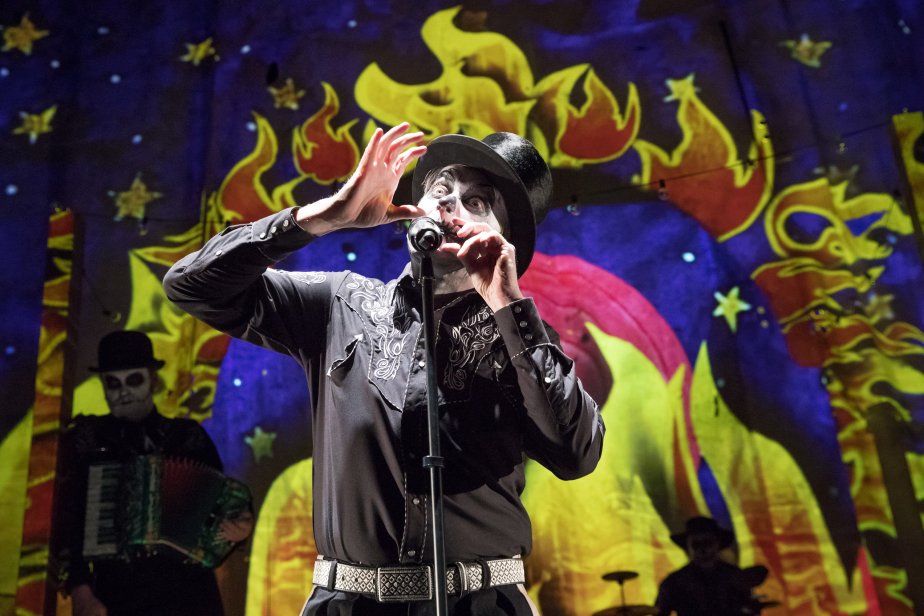 The Tiger Lillies have been delighting and possibly revolting audiences for nearly 30 years. This “anarchic Brechtian street opera trio” are Grammy nominated, world class purveyors of unapologetically deviant and defiant shows. Commissioned by HOME, Manchester, Corrido de la Sangre is a vivid, glorious celebration of the rip roaring circus that is the Mexican Day of the Dead. Ruthless and gruesome no one escapes unscathed as this dark and gleeful trio play their twisted tunes.

Three musicians on a stage within a stage, pasted in garish make up and suitably clad to evoke their long dead characters, this corrido band rises from hell to play again and tell the ghastly tale of their demise. From the opening number it is clear that this is no grotesque parody but is a high calibre, darkly anarchic cabaret.

The band are skilled musicians playing a range of instruments from piano and ukulele – Martyn Jacques to upright bass and musical saw – Adrian Stout and Jonas Galland on a range of drums. Martyn Jacques sings with a laconic and dispassionate falsetto that can be pure and sweet or acid sharp and vitriolic. At times it feels like Dave Vanien from The Damned has met Noel Coward in the catacombs and formed some unholy musical alliance with a mariachi band.

The lyrics of each song drive the narrative along with vivid imagery that is not for the mawkish or easily offended. Orphan is sweetly plaintive and poignant, La Bruja mournful and haunting while Scarface is a shocking and visceral description of the ghastly disfiguring of a young women. I bought the soundtrack and I’m still humming along to the bizarrely upbeat Good Doctor and the haunting Borderland.

Visually it is gorgeous. The staging is intimate, and the combination of projections, shadow puppetry and papercut artwork create a constant feeling of wonderment as reveal after reveal alters the staging like a kaleidoscope and creates a sense of the performance being peeled back through the years like Russian dolls unfolding in size. The backdrop gives a sense of the decaying splendour of old Mexico and the ragged holes suggest the disintegration of cloth like flesh from a corpse. The projection of colours and shapes from fiesta lace and flowers to the gold of icons weeping blood to Mexican skies and flames of hell is visually stunning. It evokes the magical realism of Frida Kahlo but with the scale of Diego Rivera folk art murals. Director Mark Holthusen has created a beautiful visual spectacle that pulsates like a vast beautiful beating heart.

As the good doctor says – Once you are in, you can never get out. Leaving the performance at HOME last night I was tempted to ask for a lock in and for the deadly trio to rise again and sing another corrido.