By Louise Mothersole and Rebecca Biscuit

Where are they?? What’s wrong? The set is shrouded in grubby white sheets and there is no sign of the girls. The clock is ticking, the theatre is rammed and anticipation is rife. We fucking love Sh!t Theatre! Moments later they hit the stage and the particular bedlam that is Dollywould is underway. This is their follow up show to the hugely successful Letters To Windsor House. There is a notable shift from local to global issues as they ramp up the madness and move from fringe performance to as they cheerfully say mainstream crossover show. Thankfully when Mothersole and Biscuit say mainstream it involves painting their faces chalk- white, donning some fearsome wigs and swigging Mateus Rosé from bottles. The result is cheerfully reassuring as they end up looking just like their idol Dolly Parton. Well if you imagine Ms Parton being cloned together with some sheep, Marie Antoinette and a couple of crack whores. We fucking love Sh!t Theatre.

This new show focuses on some big issues – death and immortality , genetic cloning and brand merchandising, friendship and Dolly Parton’ s hits and tits. Dollywould is messy, boozy, sharply clever and always endearing. Watching the performance feels like sprawling on the couch watching your best mates roll in from the pub on a Friday night having dreamed up some madcap, genius concept and keen to share it before they pass out or throw up.

They use their trademark mixture of song, projection images and film and hard-core indepth research coupled with mimicry, a double swing, balloons and bodybags and giant inflatable boobs plus lots of kissing and hugging. What is “real” authentic and “real” fake? Is Dolly the infamously cloned sheep as real as any other sheep? Is Dolly Parton the butt of a joke about big hair and boobs or a woman in control of a carefully crafted brand? Regardless of how they alter their image on stage both women remain resolutely real with body hair, real breasts and filmed evidence that they both poo and wee but don’t seem to flush. 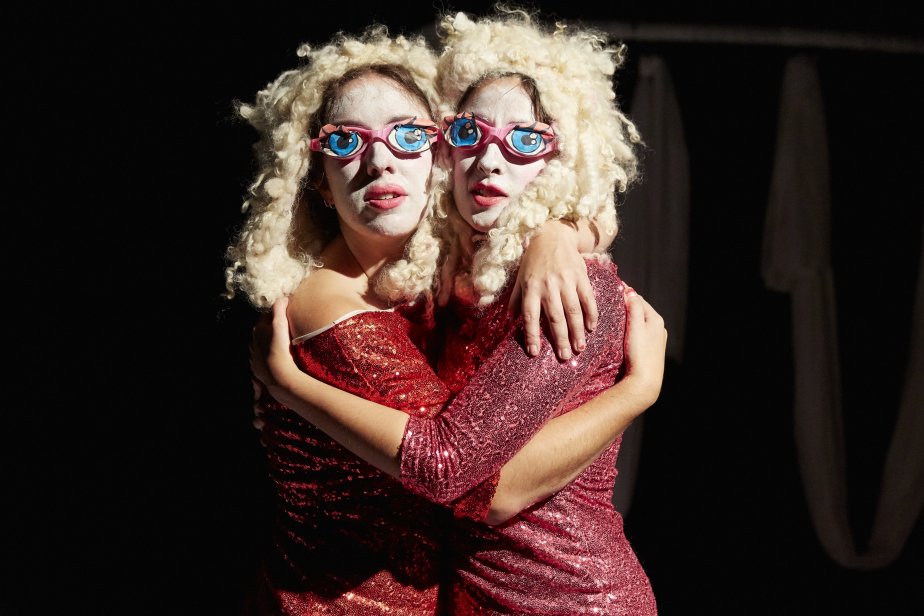 Dollywould is based on their trip to Dollywood last year and the discovery that Knoxville is also home to a research facility locally known as The Tennessee Bodyfarm as it studies decomposition. The premise behind their research visit is sound and the neat ways they use to link in the cloning of Dolly the sheep ensure that lots of ideas are thrown out for consideration. As each performance they do will be a clone of the original, just like Dolly on tour or at a Dolly lookalike competition or future Dolly sheep from the same mammary cells. In each case the same but different just like the projected images stretching out on the screen behind Becca and Louise.

Perhaps at the very heart of this show is the warmth and connection between the performers. In Letters To Windsor House they were painfully open about the cracks in their relationship and there was palpable tensions on stage. The research trip to Dollywood feels like a road trip back to friendship and camaraderie. When they speak of Dolly Parton and her longterm companion Judy and their rift and reunion it seems to resonate. As they say on several occasions It was chaos, but they’re fine now. They are never more connected than when they actually merge to become a gigantic pair of quite literally swinging boobs. Moments when they speak in unison but one deliberately fluffs their line is a reminder of the recurring theme each the same, but different. In the show they reflect on being nearly 30, thankfully they seem to be finding a way to navigate maintaining their individual identities while preserving the magic that is Sh!t Theatre.

Museum of Science and Industry

Contact Young Company working with the brilliant women of Sh!t Theatre and the Peoples History Museum was always going to be an intriguing project. She Bangs The Drums explores and celebrates the history of the Suffragettes and Manchester’s rich heritage of radical politics. 100 years since The Representation of the Peoples Act gave women partial voting rights this explosion of passion and energy would have been applauded by the Pankhursts.

Staged in part of the Museum of Science and Industry, the setting feels almost church-like with industrial beams and brick archways which are used to great effect with clever projections and bicycles adorned with twinkling lights flitting past the audience.

A band called Powerful Women are tucked in an archway and are central to much of the performance providing great music and vocals. There is drama, poetry, spoken word, dance, comedy and so much more. This is a show packed with all the elements that showcase the wide range of skills at CYC and could have resulted in a muddled mess. With a sound creative team including Cheryl Martin and Keisha Thompson and inspired direction the result is cohesive and beautifully balanced.

Packed full of historical facts such as the brutal force-feeding of prisoners and current references to #MeToo and #BringBackOurGirls, this is a trip from the lethal hatpin in a Suffragettes hat to the rape alarm in my daughter’s schoolbag. Cheeky, charming and incredibly poignant, this is a celebration of women everywhere, past and present.

This the very best kind of pick and mix entertainment. Someone else on stage doing the karaoke, social and political commentary that never seeks to preach and an open letterbox giving a candid view of life for those at the more vulnerable end of the renting crisis in London. 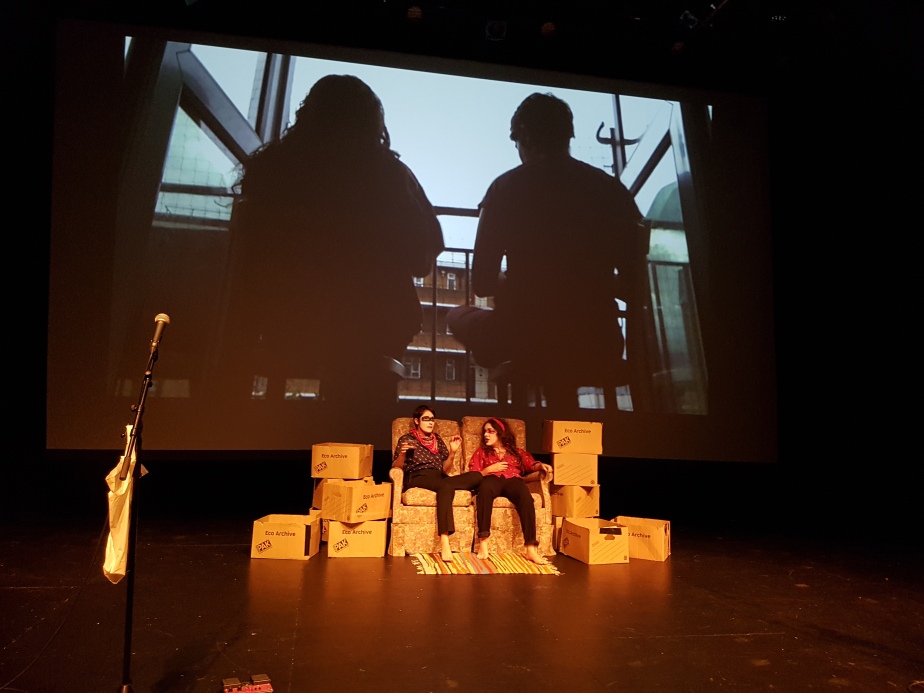 Rebecca Biscuit and Louise Mothersole are Sh!t Theatre and this is their very personal experience of  renting a sh!t flat in Windsor House, Hackney, North London. They share this two bedroom council flat with their friend Ruth who plans to move out to a houseboat and with Reggie the cat. The cramped space includes a pigeon sh!t splattered balcony and a hallway which has been converted to a makeshift garden. They pay nearly £500 each per month but have no contract so have no real security to safely call this home, especially when their curiosity reveals they are actually renting a sublet council flat.

Curled up on a sh!tty sofa as the audience walk in these best friends chat, sprawl and break into song just as they probably do around their home. The set also includes a disco ball, a cheery cotton rug and a pile of cardboard boxes. A projection screen is on the wall behind them with front of stage their mike stands connected to a loop pedal and two red cardboard post boxes.

Everything happens on stage in an endearing way that seems both childishly haphazard and skilfully engineered to fill this hour to achieve maximum impact. Using photos and video they walk us out of their cramped home unto the streets of this N4 neighbourhood. There are noisy Romanian neighbours they do sonic battle with at 7am, there is the local chippy #hashtag Fish & Chips, and the sometimes very loud St Johns Deaf Centre. Windsor House is one of 4 regally named blocks of council flats behind which is The Finsbury Park Homeless Family Project. Images of this rundown and depressing area appear on screen accompanied by a slick voiceover selling the merits of the new kids on the block. Woodberry Park is the second new private development to sit on the foundations  of the old council estates now demolished. These new properties are not for local families but are glossy six figure luxury flats with gyms and 24 hour concierge facilities.

Becca and Louise film themselves viewing a home they are unlikely to ever own as they are part of Generation rent. This is a moment where they fantasise about cushions in a £925,000 apartment. Back in their flat where the thin walls allow them no illusions about each others personal habits there is an ever growing sense of desperation about their future and an ever growing mound of mail representing the past lives of previous tenants.

It is human nature to be curious and often to prevaricate. Sh!t Theatre do both very well. Thanks to a quaint legal loophole they can start opening the mail. Like all our Christmases together the letters reveal colourful hints of other lives lived in Windsor House. A kaleidoscope of song, dance and social media feeds reveal Rob Jecock the adult baby or grief stricken single father, Daisy Murray and her magazine loving dad and Saad Madras who gambles his way into debt with the Turkish mafia. They buy aspirational shirts from catalogues like The House of Bruar. They cheerfully stalk their old neighbours in attempts to help them though no one appears to be interested in supporting or reassuring them re their own rental rights. In their search they are irrepressible singing silly songs, switching accents and clambering over sofas to build cardboard houses. This could have been an unholy mess.

There is a very different energy present when they break up their search to don the anonymity of their red cardboard post boxes. Here they read each other heartfelt personal letters from the sanctity of the post box as confessional. It is these moments which highlight the social housing crisis in a way that transcends shocking statistics. Ordinary loving friends who are both petrified of change and desperate to embrace new opportunities. Windsor House is for now both a refuge and a prison.

Ruth moves to a houseboat.

Becca moves out after a row.

The shirts from House of Bruar cost £65 each and are sh!t quality according to Louise.