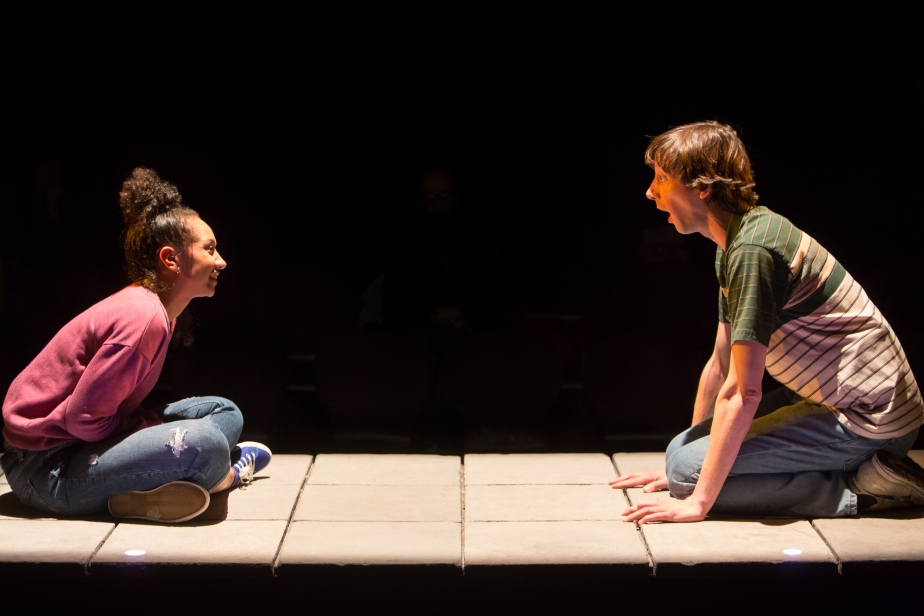 How My Light Is Spent. Royal Exchange, Manchester. Photo by Jonathon Keenan.

A phone connection at precisely 7.30pm every Wednesday evening  for precisely nine minutes has become the only meaningful social connection in the life of 34 year old Jimmy living at home with his mother in Newport. Kitty, a telephone sex worker saving up to study to be a Psychologist is his only conduit into an existence where he matters and he feels fully alive.

Winner of the Judges Award in the 2015 Bruntwood prize this is a darkly comedic look at social disengagement and how easy it is to literally disappear without the social constructs of family, work and interpersonal relationships.  This two-hander could be thoroughly bleak and grim but the whimsical introduction of an actual vanishing man brings a lightness to the play.  Rhodri Meilir is excellent, giving Jimmy a fully fleshed character who is socially clumsy, lugubrious and still desperately eager to open his big Welsh heart to love.  Alexandria Riley is simply wonderful as a  bruised but never broken woman with big dreams and limited options, however her character would benefit from further development as the role of Kitty is equally important to this play.

Both actors  also very effectively voice the other characters in the play bringing alive Rita as the mother who can engage with The Salvation Army but struggles to communicate with her son except by phone or through the bedroom door. Kitty’s topiary obsessed Landlord Stevo is a small divorced man who collects porcelain dolls as fragile as his hope of buying Kitty’s love. Mallory is the brittle, gobby daughter Jimmy was estranged from who swings in the park waiting for the light to go out at home before she returns to a disinterested mother. All reflect the themes of loneliness and invisibility and dispossession.

Staged in traverse this cleverly divides the audience while ensuring we are forced to look at each other as well as at the actors. Fly Davis  has created a stark bridge which both maintains a sense of   separateness acting as a barrier to connecting and a kind of stepping stone to reaching out to others. The use of sounds of keyboards tapping and swings moving in the breeze and naff music are really evocative and allow us to see the invisible and wish to connect.The lighting crucial in a piece about invisibility delivers on every level. The closing scene brought all these together under Director Liz Stevensons sensitive eye  to create a little bit of magic that  made my arms tingle like Jimmys.

I left the theatre wondering what became of the widowed lady who I used to chat to at the local supermarket before her job  vanished to be replaced by a hideous self service till just as Jimmy’s job vanished to be replaced by a coin bin. This piece is timely because it reflects the general misery of the reality of Austerity for the working class as redundancies and relationships breakdowns create a non-class of invisible souls while reminding us of how brightly any soul can shine if nourished an nurtured.

SHERMAN THEATRE until 27 May