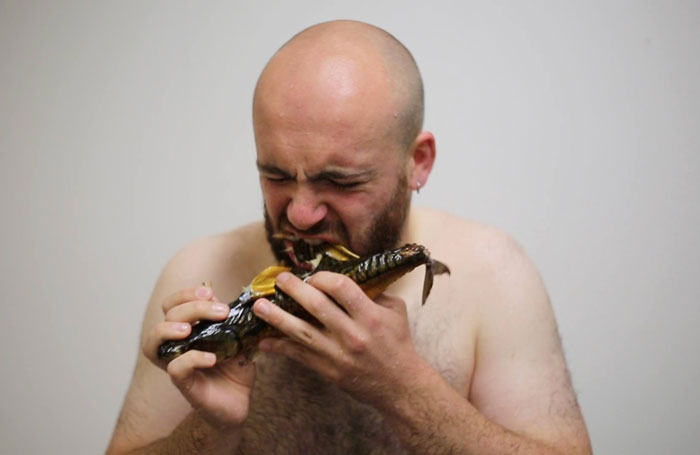 This is the kind of theatre experience that might leave an audience dumbstruck at times but is guaranteed to generate conversation in the bar afterwards. BREACH have produced a piece of partly verbatim theatre that can shock and provoke but is also a sensitive and moving portrayal of how inhumane humanity can be.

In the midst of Sixties Cold War paranoia NASA funded a ridulously indulgent experiment into animal neuroscience. John Lilley headed up a laboratory on St Thomas experimenting with 3 dolphins in captivity. The main protagonists of this true story are Margaret Howe Lovatt and Peter a young male dolphin. There seemed to be little emphasis on hard science as Margaret had no qualifications as a researcher other than she was curious and liked dolphins. Lilley was also curious, mainly about what effect LSD might have on a huge brain- it might be useful to mention his best mate directed all the Flipper movies! The aim was to teach the dolphins to speak English and so improve Mankinds chance of communicating with extra terrestials should we ever meet any.

TANK uses dried out tapes of some surviving recordings of this research to illustrate this fishy tale and lo fi microphones to reproduce Peters attempts at language. The large video screen is used to show the underwater film of Peter and Margaret while the four actors on stage work to create a prism like take on what really occurred in the lab.

The actors bicker on stage as to the detail of the actual events. Margaret was “ruggedly feminine” and wore heels or boots or ….. Pam the dolphin had dried out traumatised skin or was covered in concealed blood. This is an odd couple love story or it’s a girl wanking off a gigantic dolphin cock. At the centre of this piece is the many facets of the story. Love, science, philosophy- how do we each perceive an event and how does experience colour our viewpoint? Here the women are wearily sensible  and frustrated by the men who sexualise  events like smutty schoolboys.

There are some delicious moments as they all sensuously dance together with blank faces or as they strip down and  Boylan puts on his dolphin mask. The air of menace is never far way as they fantasize about Margarets ruination and death at the fins of a dolphin army.

This is raw and edgy and joyous, it is dark theatre. It reminds us just how crazy humans can be but there can sometimes be a little magic in the crazy. TANK is good crazy.

Twenty years after these experiments I spent a summer in Windsor researching parenting and attachment behaviours in dolphins. Two mother and their babies and I got to observe and play with them. It was heaven on earth.