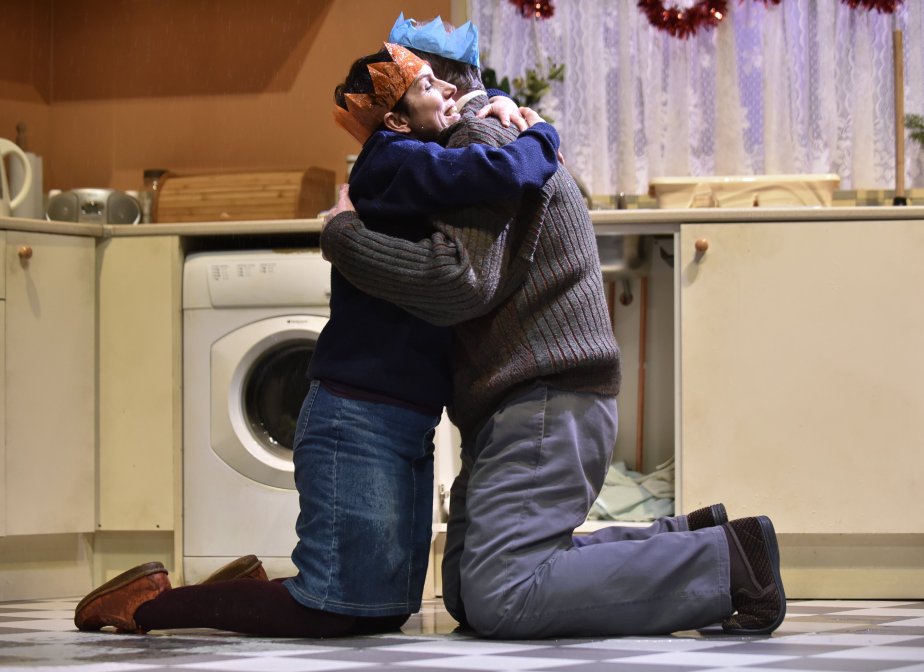 The Kitchen Sink has a warm rich vein of humour with a steady flow of lively banter and acerbic quips. This is an undoubtedly upbeat take on some serious kitchen sink dramas. This is an Everyman, everyday family dealing with financial worries, plumbing woes; and managing disappointment, frustration, fear and grief. The kids are in flux as they try to find their place as adults. Dad is stubbornly clinging to a past that has no place in the future or even in the present. Mum is chucking lifebuoys to all and sundry in the shape of courgette muffins. In this scene of adversity there is also buckets of love and empathy. The Kitchen Sink is for everyone who has felt like screaming in their kitchen and it is an infectious reminder that we could be up on the kitchen table and dancing and singing along to Dolly Parton.

The staging works really well and Anna Reid’s design conveys the shabby family kitchen in need of a complete overhaul. The faded oranges and beiges of this utilitarian kitchen are brought alive by the people who inhabit this room as in so many homes. The wonky Christmas tinsel and Billy’s incongruous portrait of Dolly Parton are the little touches that make this home unique. The lighting is clever as each scene changes in muted semi darkness as family life continues to ebb and flow with a steady heartbeat of home and hearth.

The family are Northern working class with Kath, a feisty Mother who works two low paid jobs and yearns for change and rails against stagnating in a place that is a good place to come from, but not a good place to end up. Sue Devaney plays Kath with an infectious energy which never dims. She works hard at family, at work and in life but she is never a martyr but instead retains a kittenish, playfulness whether stripping off unto a newspaper or casually savouring her first spliff. There are moments where I wished the laughter dialled down a little to allow more space for her heartfelt plea for just a tiny change without the World ending. The poignancy and tenderness in the scene in which Kath has made the buffet for Pete’s Gran’s funeral is a joy to watch. The simple compassion of a Mother who loves to “mother” being “Mother” to the bereaved and orphaned Pete.

William Travis provides a dour, slightly gloomy Martin who is a good foil to wife Kath. Initially they seem ill- matched as her sunny playful nature seems at odds with his downbeat gruffness. Yet the moments of real laughter between the two shine as their strong emotional connection is evident. This is marriage at its best- there is humour, forbearance, compassion and earthy attraction. They may have a barely half-filled jar of 20 pences as savings security but they have a fortune in a rock solid union.

The children are less richly drawn. Billy played with great sweetness by Sam Glen, is ill equipped for Art College in London where his heartfelt homage to Dolly Parton is greeted as “kitsch” and “cool”. His warm and affectionate relationship with his mother is spontaneous and full of horseplay which belies the more awkward one with his father. This is a home where children are undoubtedly loved but where an artistic, gay and slightly diffident son is slightly held at arms length by a father who struggles to relate to him. Sophie played by Emily Stott is barbed wire brittle and is clearly a wounded soul. Her Mother senses something is wrong and Sophie is clearly very close to her father yet no one seems able, or dares to probe too deeply. Perhaps in every family the dark stuff lying at the bottom of the U- bend is avoided where possible. Like the makeshift mends on the kitchen sink until it finally erupts and make do and mend is no longer an option.

The most finely drawn character is Pete the young plumber and would-be suitor to Sophie. David Judge delivers a beautiful performance full of awkward grace and sensitivity. The quiet resilience and steadfast devotion to those he loves is a study in grace and gentleness. Despite or because of his own losses, he is the only one to really see Sophie’s pain and try to help her. This play subtly highlights how children can be loved and valued but sometimes “missed” in the business of making ends meet with multiple jobs or unsociable working hours.

The Kitchen Sink is filled with the music of Dolly Parton. This is a soundtrack full of songs bursting with energy and poignant, heartfelt melodies- a perfection reflection of this family at this particular kitchen sink. In the ladies loos after the show both cubicles were engaged with girls singing Dolly at the top of their voices!! I’m not a country music lover but I’ve been playing her all week. Small changes. Thanks Kath!! As the character says I got on the Circle Line in the wrong direction- Nothing happened- I just sat it out. This play has an ask for all of us. Do we want to sit it out or get off and go a different direction and see what happens.