Six new plays with a modern take on the medieval Mystery Plays that toured the country centuries ago. Six actors who carry the same names through each play. Six towns and cities ranging in size from the small Cumbrian town of Eskdale to the sprawling industrial city that is Manchester. This is an ambitious project that seeks to reflect what are the connectors in communities today. This is a look at how the past informs the present and how we can struggle to move with the times. We can honour our history and be nostalgic about our past, however we also need to adapt and be open to change. The stories emerging from these communities reflect the uncertainty and the hopes and fears of a country poised for further significant changes.

The first five plays follow the same format with interwoven personal stories that reflect the history of each place and the political and economic issues those communities are currently dealing with. The sixth play which focuses on the bombing at Manchester Arena differs in that the cast of six form a support group circle speaking in turn as they depict the everyday moments of an ordinary day during which a terrorist act tests a city and its communities. Within the poetry of Thorpe’s words there is the uncomfortable question of how and if we can include the bomber as “one of ours” while upholding the message of Don’t Look Back in Anger. 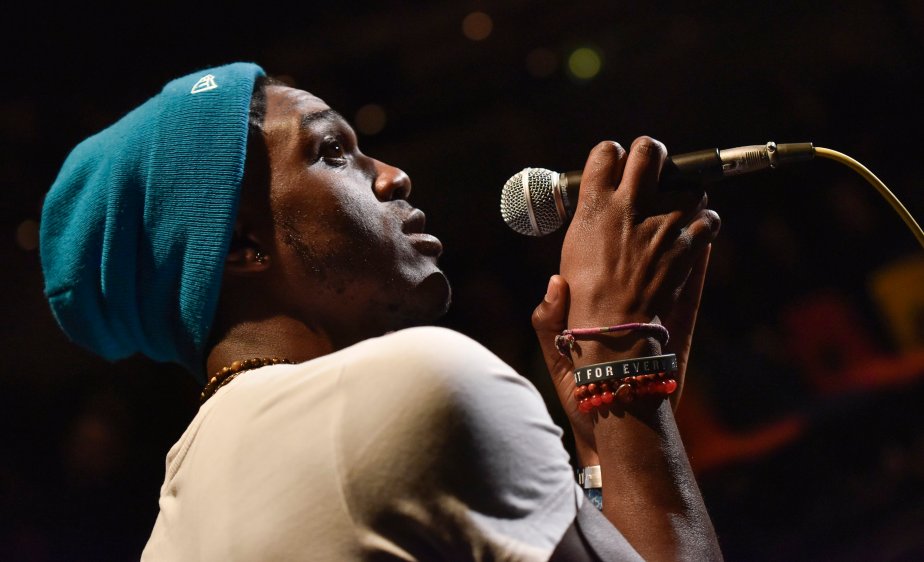 Within the six plays there are some lovely moments with beautiful writing with delicately nuanced performances. Staindrop looks stunning with its blend of early Tudor costumes and candlelight. Telling the ancient story of a local Lord and his fate as a “blizzard is closing down the world” interspersed with the modern tale of financial security and the lottery of birth. In Whitby the dark sea on the monitors is a timeless backdrop to ” vampires, trawlers, priests and miners”. Here a family are splintered in various ways as they seek to make sense of the suicide by drowning of son and brother.

There are some notable performances throughout these plays with Nuala Clifford showing great range and investing each version of Ginny with subtle depth and sensitivity. Benjamin Cawley is similarly convincing as Mark and his beautifully modulated voice speaks Thorpe’s words with a real poetic musicality. Performing all six plays on one day is a epic task for all six actors and there are some issues with timing and pacing, however there is something special about appreciating the scale of this work when seen over a single day.

The themes of these plays explore history, changing identities, immigration, economic and social worries and personal issues such as suicide, alcoholism and personal prejudices. In the midst of the plays there are little gems of local life as we are introduced to Pigeon the peregrine falcon from Staindrop or listen to bell ringers from Stoke, a comedic duo from Boston or participate in a pub raffle – I won some biscuits!

These elements really connect the plays to actual communities and effectively anchor these plays in the diversity and communality of this country. I felt a sense of familiarity in this journey from a small town like Eskdale to the City of Manchester. Like some of the characters in these plays I too got out of a small town but still feel the the connection, made stronger by family deaths, to a place that helped define the person I am. Working class family lie buried beside the Lords of the local Village having once won the lottery of birth themselves and owned castles centuries earlier. I suppose I too have lived as an immigrant being of Scottish descent growing up during the Troubles in Northern Ireland. Living on the border it was normal to have neighbours who would help you in a crisis yet also seek to shoot members of your family. Helping clear up after frequent border village bombs, I truly have seen the worst and the best in people in a community. At its most potent The Mysteries serves to reassure us we are not alone at our most sublime and at our weakest, if we look closely we will always see a sense of kin and connections. We may need this now more than ever as the uncertainty of Brexit reality looms and “borders” become ever more relevant to conversations in communities.

At The Royal Exchange until 11 Nov