The Manchester theatre company Monkeywood have created The Manchester Project as a celebration of Manchester and what it means to be Mancunion. Manchester is home to all the 19 writers and the actors involved and fittingly it is being performed at HOME.
On the stage are a series of simple white cubes and hexagonal blocks which evoke the honeycombs of a hive in which the Manchester we know interconnects and holds our creative worker bees/Mancunions. The bee has been  our symbol since The Industrial Revolution and adorns the mosaic floors of our Town Hall, our public bins and the tattooed skin of a community resilient in the face of terrorism.

It is easy to think of the Manchester we know as portrayed by Coronation Street or on the music tours with The Haçienda and The Salford Lads Club or the rousing poetry of Tony Walsh or Mike Garry. What Monkeywood have done is to give a voice to the wider arena of the whole city spread across 19 tiny plays that criss cross the City from Chorlton to Droylsden to Middleton to Rusholme and back to its core the City Centre.

First up is Reuben Johnson performing his own piece Little Hulton. Opening with a blast of fresh energy he moves across the platforms recreating the playgrounds of his childhood like a bee between flowers. This beautiful, questioning piece conveys a sense of attachment- we may leave this city but it has the power to pull us back.

There are five actors on stage and 19 plays. It is astonishing and impressive how the actors power through such a range of varied pieces without pause or break. There is a lot to take in as each tiny play is packed with poetic imagery. The brevity ensures that each writer wants to make every single work count and create impact.  The direction by Martin Gibbons creates a sense of flow which is seamless and elegant. The music used is a smattering of iconic tracks opening with Joy Division Love Will Tear Us Apart and ending with Buzzcocks Ever Fallen In Love. The Manchester bands and the buzz of a solitary bee mesh these little gems into a cohesive whole.

We flit to Levenshulme where the tone is gritty and sarky and the image is of meat raffles and possible hook ups at the weekly nude bathing sessions. James Quinn and Curtis Cole are clearly relishing the words of writer Gareth George. Prestwich by Becky Prestwich brings the lions of Heaton Park and the largest mental asylum in Europe. Eve Steele really shines as she evokes the sense of being different or other whether in spirit, religion or ethnicity.

Timperley conjures up the iconic Frank Sidebottom while Rusholme revisits the bee with the black and yellow uniform of a school born from Manchesters’ proud history of female emanicapation. Rebekah Harrison’s Droylsden is a poetic, tender and evocative portrait of a young soldier not forgotten by his community. Meriel Schofield and James Quinn bring quiet dignity to a piece that reminds us of the losses and sacrifices that run deep in the story of every community.

Old Trafford glimpses the memory of the cosy domesticity of a couple in their first home with an image of a couple dancing in their kitchen while over in Burnage a cab meter is running and there’s Sunday dinner at Our Kids. In Middleton we queue in Tommy’s Chippy with writer Chris Hoyle who vividly portrays small minds, small town chatter as he prepares for his escape to the City centre via the newly “done up” bus terminal. A young homosexual given joyous opportunities to explore in Canal Street. 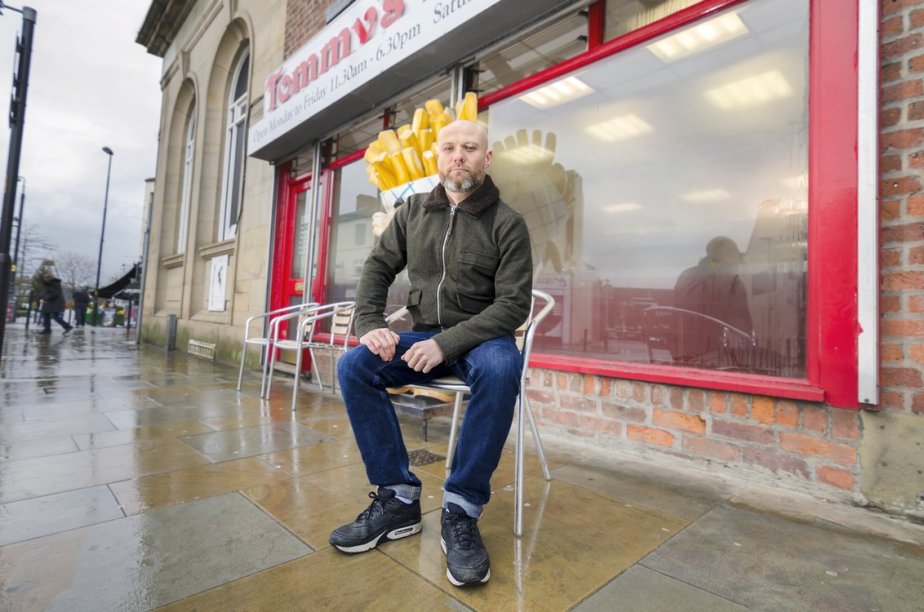 Didsbury reminds us of Manchester’s rich, musical heritage where everyone seems to have a story in their front room. Samantha Siddall explores heritage and what we hold dear in our community in Denton as a town planner looks at the outcome of his work. Chorlton has the largest public graveyard in Europe as Becky Garrod recalls family strolls and rituals. Withington sees James Quinn relish the closure of Greggs as Pasta La Vista as old and new businesses try to co-exist in the community.

Ian Kershaw writes poignantly of Harpurhey with the racist comics in The Embassy Club and the horrific burning of the local dogs home. The tram stop at Cornbrook is a bleak, blank canvas yet peel back the layers of history and Eve Steele and Sarah McDonald Hughes see Pomona Palace with the magic of lions and tigers in its pleasure gardens.

Cathy Crabb takes us back in time to a pub in Failsworth where Meriel Scholfield brillantly evokes a truly beautiful man Ernie Jump, whose front teeth are fashioned from Scrabble blocks. In Moss Side despite stereotypical expectations Curtis Cole conveys kindliness and humour and carnivals without the risk of being shot or sodomized! Sarah McDonald Hughes deftly paints Flixton as having little of merit bar differing sized fields yet there is still fun to be had in a place where nothing happens.

The closing piece by Eve Steele is of course the City Centre and what a celebration it is. I fucking love town. It is a passionate love poem to Manchester city centre for being my place as a mad little punk. My second home.

The Manchester Project is glorious. It is a five star theatrical TripAdvisor for Manchester. Like the honey from a bee it is a sticky, messy, sweet and golden stream that glues us together as Mancunians.