In the opening minutes of Happy Days there is a strangely surreal sense of reassuring normality as Winnie methodically cleans her teeth and applies her lipstick. Yet this women is inexplicably trapped from the waist down in a mound of barren earth like the Queen of a floating island which is brilliantly evoked by Designer Naomi Dawson. Director Sarah Frankcom and Associate Artist Maxine Peake have joined forces on Samuel Beckett’s Happy Days. It is a stunningly evoked vision of some kind of absurdist prison or hellish afterlife or perhaps, simply an allegory of a marriage gone stale.

Maxine Peake draws on all her acting skills and delivers a Winnie who shimmers in the harsh sunlight and gleams as the light finally fades. She is girlish and gay or plaintive and rueful. There is quite simply nowhere to hide in this production, nor are there cues from other actors as Willie is always out of her sight even when he is near her. Peake is just sublime throughout, brittlely blithe and gay in Act 1 and pitifully sunken eyed and unkempt in Act 2. With a camera zoomed in on just her face and every tiny expression projected on monitors above her, she never wavers. Her Winnie is runny nosed with an aged voice, seemingly forgotten like an O.A.P in a sub-standard carehome.

She is the quintessential upper middle class British woman who was probably a pre-war débutante brought up to be pretty, charming and cheerful but also brave and stoic in the face of adversity. She reminded me of the Stephanie Beacham’s Rose in Tenko years ago. A delicate beauty who could still ooze pure class and glamour in rags, and who had cut glass vowels and cheekbones with a backbone seemingly formed of pure steel. Certainly Winnie keeps returning to the past to speak in the old style or recall past moments when she was young, foolish, beautiful while holding unto the classics to not forget familiar anchors. She is terrified of losing those anchors to sanity yet can also blithely ask Willie What is that unforgettable line? 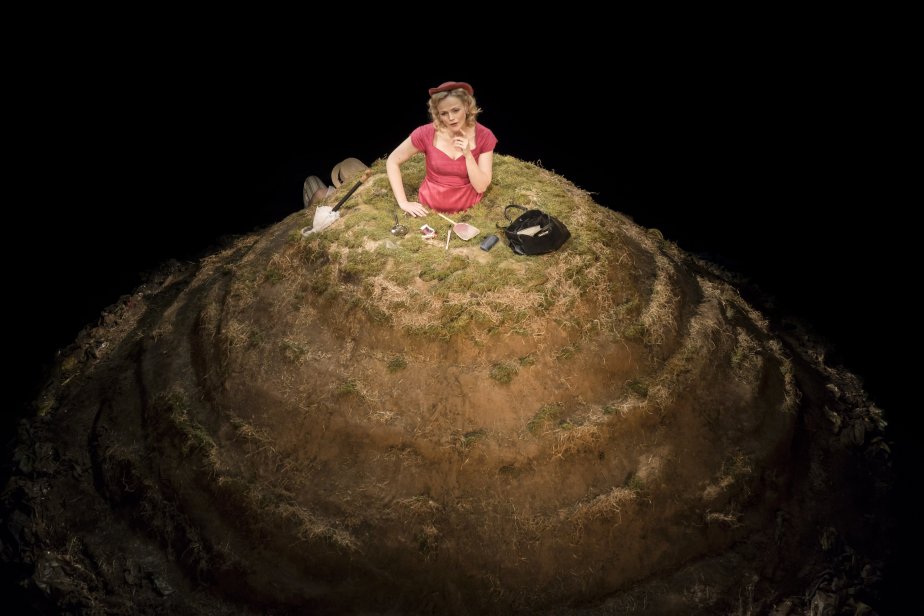 It is the vulnerability of the human condition that pains Winnie more than the actual paralysis. What is most important is to be heard as a way of validating sanity and existence. She prattles away to Willie pastiming through the horror of her predicament as a coping mechanism. The maintenance of small routines and the comfort of Willie and the bag are her anchors to ensure she holds unto sanity and to gravity. Even as a husk of her former self in the second act unable to utilise these comforts she wills herself to focus on them as tangible memories, seeing Willie again and singing her song from the now out of reach music box.

This play is a study in mindfulness reminding us all how to harness our senses and focus back in on the little things. In a world where we are often surrounded by the incessant noise of people, media, memes and madness, Winnie’s plight is terrifying yet also an invitation to slow down and stay in the moment.