Shakespeare’s tale of the “undigested and deformed lump” that is his Richard III is considerably tweaked in this version by John Haidor for Headlong. Here we see a man more emotionally stunted than physically restricted by his disability. Tom Mothersdale delivers a Richard whose twisted body is as fluid as his nature is mercurial. The hall of mirrors that dominates the set serves as judge and jury to Richard’s lack of conscience and reflects back to the audience as a means of drawing us into this tale of political greed, narcissistic ambition and false news.

Mothersdale manages to repulse and charm in equal measure. His capacity for brutal acts and honeyed words is that of a true sociopath or charming manipulator. Moments of visceral violence as he bites his victims with the suddenness of a deadly spider sit uncomfortably alongside humour as he mischievously addresses the audience close up or prances with a makeshift crown like a gleeful child ransacking the dressing up trunk. For all his cunning and remorseless violence there is the vulnerability of a child who recognizes his mother is ashamed of his twisted body and repulsed by his twisted nature. Director Haidar ensures that we see this wounded child who has long ago decided that if he cannot have the love and admiration of others, he will command their hate and fear. Mothersdale captivates throughout in what is a truly demanding role. Rarely off stage he is never less than electrifying especially in the second act when demented by jeering ghosts he sees his fleeting success melt away on the battlefield. Bloodied and mud stained he smears mud across the reflected ghosts as if to wipe out any hint of his own wrongdoings.

Chiara Stephenson has designed a set that is gloomy and forbidding in its grey ramparts and dungeons but cut through with reflective mirrored archways. These arches allow actors to move rapidly between scenes while also creating depth to the set as the ghosts appears behind them and the audience is reflected in them looking at ourselves just as Richard examines himself in these multiple looking glasses. 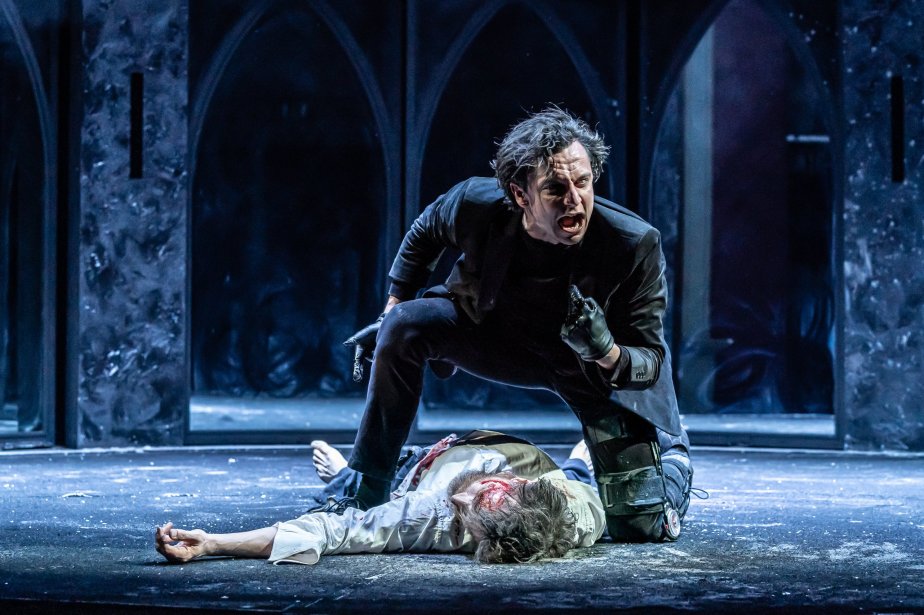 Haidar makes use of every possible dramatic element that can be drawn from this gothic castle. Stony grey yet pulsating with life and bloodied by death this is a building that echoes its history in every mirrored arch reflecting lives once there and now just ghosts in the fabric of the building. The use of light and sound by Elliot Griggs and George Dennis provide striking flourishes that give the murders and battles scenes slashes of colour and sound that evoke video game violence- perhaps to suggest Richards own childlike lack of awareness of the real consequences of his actions. If at times elements appear overplayed or exaggerated they encapsulate Shakespeare’s original exaggeration of the real man. Whether you love it or not the impact of the attention seeking design elements and directorial flourishes are as in your face as Richard himself.

This feels a very fresh and timely revisiting of Richard III. There is a truly monstrous quality to this character in his relentless quest for political power. The wily cunning off an ambitious man who exalts in having neither pity love or fear is a chilling reminder of some of our politicians who make decisions for us based on their own fragile narcissistic egos and lust for power. Like Richard they strut across the world stage daring us, the audience, in how much we will allow them to destroy before we revolt and them down. Personally there are quite a few political anti heroes I would love to see buried under a carpark in Leicester!