Written and Performed by Lauryn Redding

It’s 14 months since the Royal Exchange closed its doors on the eve of press night for Rockets and Blue Lights. Racing across St Ann’s Square to the cheers across the city as England scores in the footie, I spot the smiling faces of the theatre Comms team as they welcome everyone back to press night. There is a general feeling of goodwill and excitement in the building so undoubtedly huge pressure on Writer/Performer Lauryn Redding and Director Bryony Shanahan and the team to make this a night to remember. It’s a huge gamble to have only one performer sustain a 2 act 2 hour plus performance on the main stage and make it work, make it matter, make it memorable for the work not just as a reopening after a global pandemic…Lauryn Redding does just that. Funny, tender and raw, Bloody Elle is a rousing tale of sexual awakening with all its joy and sorrow. As Redding tells us Censoring. Of anything. Of anyone. Of yourself. Of someone else. Is exhausting and it cuts you from the inside.

Director Bryony Shanahan and Movement Director Yandass Ndlovo ensure that the performance has flow and energy and never feels like a static piece of solo story telling. The staging by Designer Amanda Stoodley dispenses with the famous banquette seats and their potential covid risks. Instead she introduces red stools and candle lit tables to create a cosy pub vibe that effectively frame the stage. This is gig theatre and a true one woman band. The original music by Redding with direction by Sound Director Alexandra Faye Braithwaite is great and drives the narrative but also creates a swirling soundscape to add mood and shade to the story telling.

The multi levelled stage aids the introduction of characters and scenes including Elle’s high rise council flat in Cloud Rise and is splashed with what seems to be a bucket of white wash? This picks up the bursts of coloured light that flood the stage or envelop Redding. The white wash effect also seems to reflect the way we can paint out aspects of ourselves or let others not see our true colours, to continue to not see the whole of us, the truth of what and who we may be if we own our own story. Corny perhaps but I wish Redding was flooded with glorious rainbow colours as she look her well deserved second curtain call.

The story is a simple story of girl meets girl. There is a division of class and aspirations when working class Elle meets posh Eve with guacamole green eyes on route to a medical degree at Oxford University. They bond over vinyl records and work at Chips and Dips despite their differences – Eve has a pony in a paddock whereas Elle has Big Sally on the 12th floor. The driving force of this narrative is less about class, it zeroes in on the agony and ecstacy of first love and how this is still intensified by the difficulties for many of coming to terms with your sexuality and being accepted for who you are and how you love.

This is a show that might not have been seen at the Royal Exchange without the global pandemic. Redding would probably been too busy working to create this show and a solo gig theatre performance might not have been an obvious choice for this theatre. It probably needed ten years of growing and healing for Redding to be ready to tell such a personal story. There is a vivid whip sharp authenticity to this performance. Insouciant banter with the audience, poignant and emotional song writing, raw, vivid storytelling filled with poetic observations…Bloody Elle ticks every box and more. Kintsugi is the Japanese art of rebuilding what is broken or damaged using gold to create something stronger and even more beautiful. Redding has taken her broken heart and using her artistic talent as Kintsugi – the result is the threads of gold running through this gorgeous show. Hopefully as we navigate the new normal of Covid-19, the Royal Exchange is also emerging with new seams of gold too. 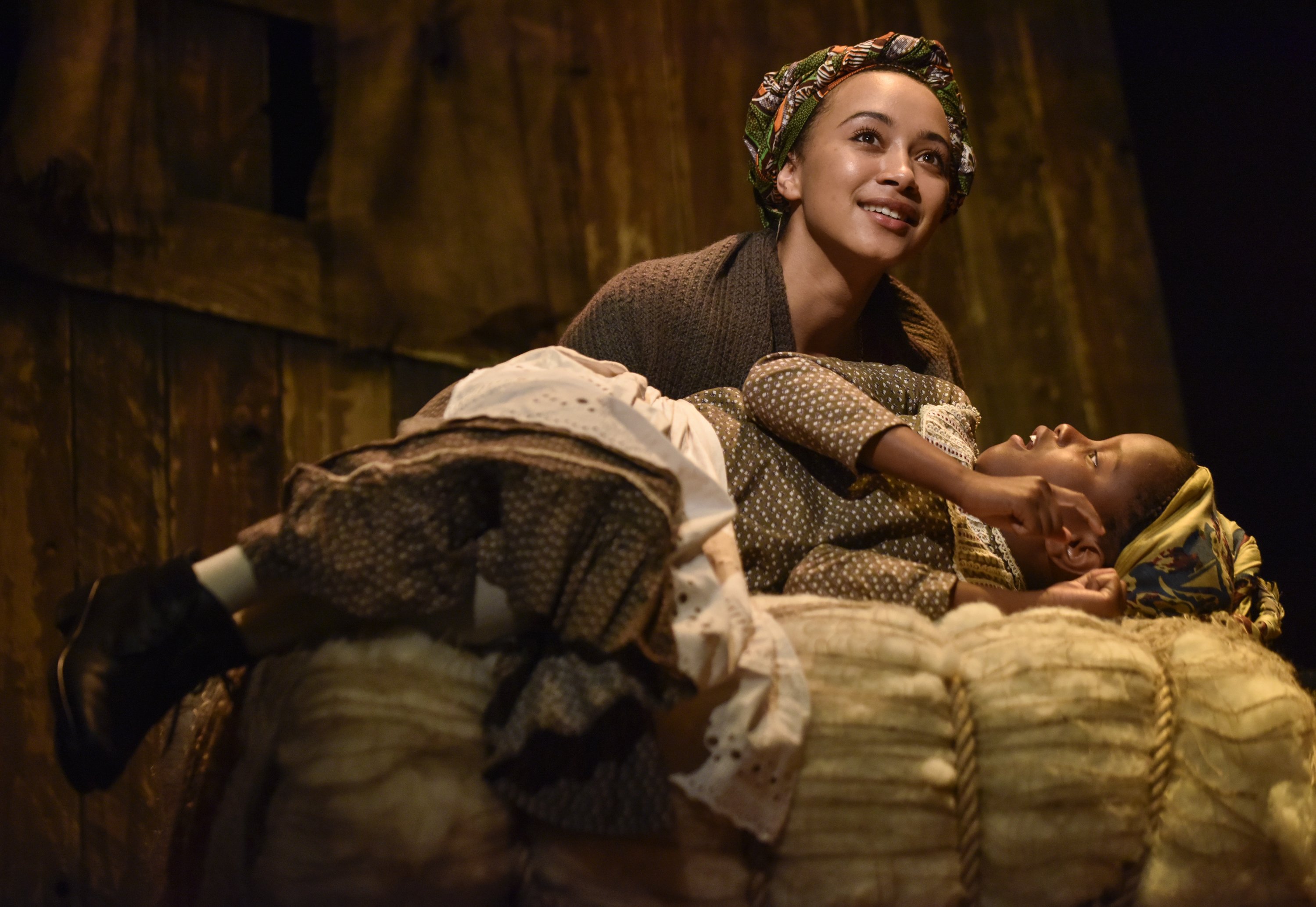 Ian Kershaw has written a protest musical based on the 1912 Bread and Roses worker’s strike in Massachusetts that is as relevant today and is a powerful call to arms. Kershaw is a passionate advocate of solidarity, equality and compassion and his views shine through in this piece. Bread & Roses is an anthem for change and a homage to the hope that Our Tomorrows are better than our Yesterdays.

The opening scene is beautiful and truly memorable. Holding candlelit lamps, the cast bring in the new year of 1912 as they sing Auld Lang Sang a capello. New legislation had decreed that women and children now have a working week of 54 hours instead of 56. The Bread and Roses strike was the worker’s response to mill owners reducing pay and speeding up the looms. In a community comprised mainly of immigrants, the particularly special nature of this strike is that there was a united multinational response from the workers. Belts on looms were cut, the first moving picket line in America got around new legislation about loitering and children were sent away to places where they could be properly fed. Public response forced change and the mill owners had to accede to the workers demands.

This is a very strong and multiskilled cast. They sing extremely well and many play a range of instruments including piano, guitar, and banjo. The music is a mix of belting hymns such as Rock of Ages, haunting Irish ballads like The Parting Glass and stirring protest songs. There is Power in a Union by activist Joe Hill famous for his songs in that era, the wonderful Bread and Roses by James Oppenheim and the stirring bluegrass Ain’t No Grave made famous by Johnny Cash. The protest was known as “The Singing Strike of 1912” and this play celebrates that with gusto. 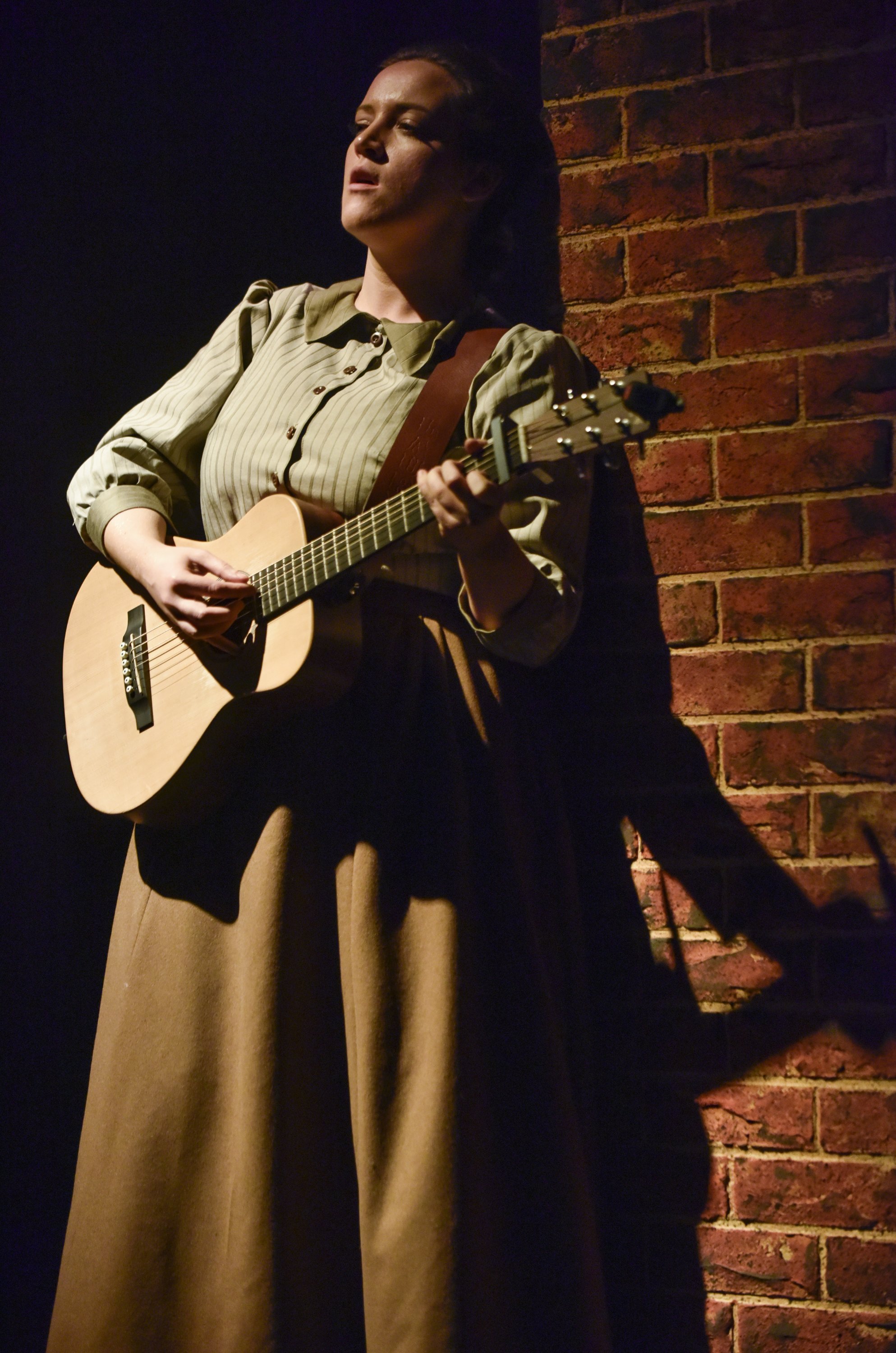 Lauren Redding as stout- hearted Martha gives a standout performance with an incredible voice and stage presence. Claire Burns as the martyred Anna is astounding. She creates goose pimples as the ghostly presence with her beautiful voice. I would happily buy the soundtrack to this production if it’s made available. Now that might be a great way to raise money for the foodbanks or homeless around Oldham??

The male performers do a great job throughout, particularly Oliver Wellington as Cal, but this is a female led cast. It’s star acting performance is Emma Naomi who has incredible natural grace on stage and captivates as Lily-Rose, the young widow and mother who finds her voice as an activist.

This was a very impressive opening night and Director Amanda Huxtable has created something very special. There are points where a more relaxed, naturalistic approach might benefit especially in the movement direction which at times appeared stilted. Moments where the chorus move into the aisles and circle during protest rallies work well creating a strong sense of audience involvement and creating more energy on stage. The illustrating of issues such as immigration, poverty, unemployment and the dangers of “false news” are crystal clear, leaving uncertainty around the need for the final modern day scene.

Kate Unwin‘s set has a real warmth and lustre. The cotton bales prevail in every scene whether at the impoverished worker’s cottage or at the factory gates where the mill looms turn overshadowing every life in the town of Lawrence as they once did in Oldham itself. The changing backdrop of gorgeous red and indigo skyscapes are sumptuous and set the mood very well. The lighting and sound is evocative as scenes shift from the peaceful sounds of riverbank fishing with the idyll of crickets singing to the whirr and clamour of the looms.

This is a wonderful production to see in Oldham and would also make an excellent show to adapt for schools or colleges to perform. There is a strong political message from the past that resonates in our current society. We may need bread for sustenance but we have rarely been in so much need of roses such as this production.