The Adhesion of Love is the 2019 national heritage première for LGBT History Month. This is a curious tale of a group of young lower middle class men from Bolton who started an extensive written correspondence with the celebrated American poet Walt Whitman during the 1880s. What is even more extraordinary is that several of them traveled to America and spent time with Whitman and maintained contact with him right up to his death in 1892. The play documents the spiritual and sexual awakening of John W Wallace. It celebrates how these young men found love together through their shared love of Whitman and his poetry in the tightly repressed society of Victorian England.

This highly detailed play is clearly a dedicated homage to all the stories of queer history still untold or white washed out of history or tragically destroyed. There is huge attention to detail which vividly evokes the era where the “adhesion of love” in men was not to be expressed physically, and understanding of Self was likely to be studied through Phrenology, spiritualism or an examination of your faeces. The speech and mannerisms of the text echo the earnestness and often florid speech of the period. 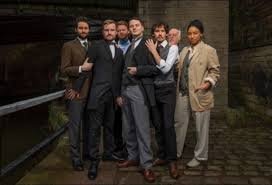 The actors appear fully immersed in their characters and the costumes and props encapsulate the period in great detail. This really does feel like a step back into another era walking in the steps of Wallace just as he walked in the steps of Whitman. What is an undoubted success for this production also delivers some problems. The dialogue is so detailed and earnest that it at times feels quite dense and static. In evoking the worthiness of these earnest young men the play struggles with tempo and gets a little bogged down.

Energy and verve comes intermittently from the more physical performances from Conor Ledger as Charles and from Macaulay Cooper as Whitman’s young companion who becomes the repressed Wallace’s “Swan Maker.” The sexual elements in the production highlight the limited ways in which self expression of sexuality could be conveyed with high risk to personal freedom. There is a deep sadness within a single line uttered by a very convincing Conor Ledger as Wallace, when he describes himself as “an outline waiting to be coloured in.”

Curiously the elderly Whitman is cast as a young black woman who brings a dry, laconic sophistication to the role but yet creates a kind of dissonance. Though perhaps this removes any possible sense of these young men being in any way groomed by the elderly poet?

There is a real value and charm within this production, however some significant editing would retain some lovely prose yet make the story flow with more energy without losing the storyline. Otherwise it risks the possibility of not being as accessible a historical play as it deserves to be.