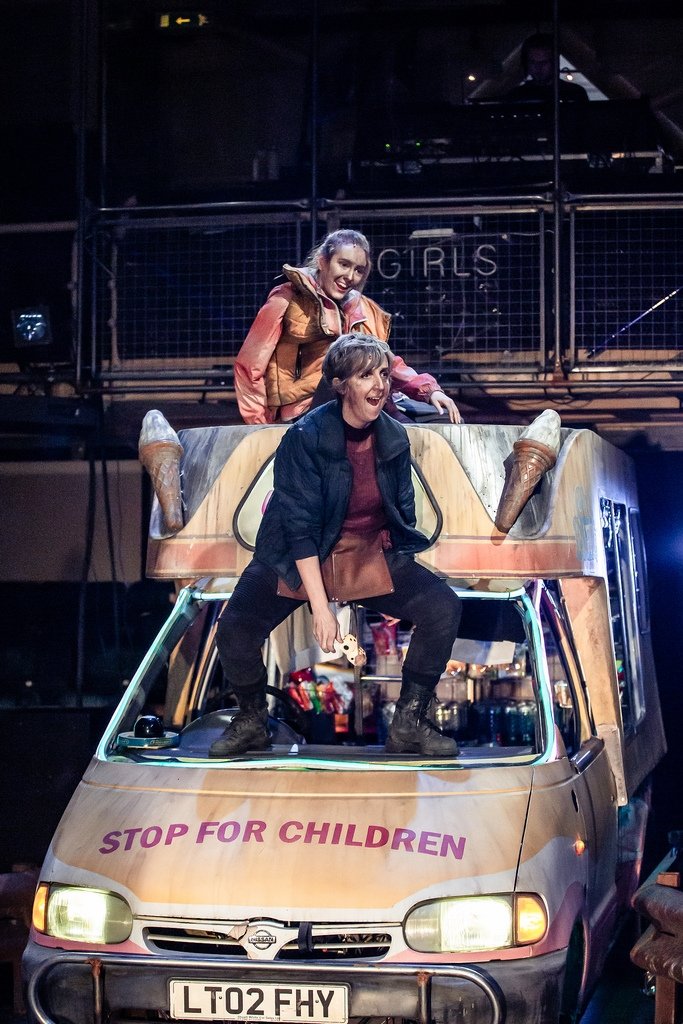 The 1939 Brecht original is a searing indictment of capitalism and an unemotional view of how individual characters respond in an unrelenting warzone. There is little space for warmth, humanity or collaboration in Mother Courage. This new production is born from writer and new mother Anna Jordan wanting to adapt the play and collaborate with Director Amy Hodge from Headlong and Julie Hesmondhalgh who had approached Sarah Frankcom about playing this iconic role. This is a collaboration of strong, feminist women and perhaps a timely reminder that we are all stronger pulling together than at war.

The outcome is a Mother Courage that is at times almost unbearably complex. Strong and sassy as hell, an immoral opportunist, a slippery wheeler/dealer, a proud, protective mother that can suffocate and infantilize her children but who cannot empathize with suffering and can only demonstrate her love through providing functional things rather than emotional warmth. The sheer complexity of her character is intentionally uncomfortable forcing the viewer to ask of themselves “What would I do in that situation? What am I capable off?”

Julie Hesmondhalgh has a huge undertaking as her natural warmth could easily feel at odds with Mother Courage. However there is no doubt that she relishes the role. At times unbearably heartless to those who get in the way of her ruthless and desperate pursuit of financial security, she is always a pragmatic Mother and the ultimate survivor. Bartering for her son and ultimately causing his death appears unforgivable yet it is a “Sophie’s Choice” as with no money and no van then the family would all perish. Though utterly distasteful in her lust for the next big deal, there is something unbearably childlike in her capacity to find a thread of good in the bleakest of circumstances. When Kattrin is raped and disfigured, her mother “comforts” her that now she is ugly no one will rape her again, while herself utterly alone and dragging the husk of the van, she reflects that bereft of all children it is lighter to pull.

Director Amy Hodge draws some strong performances from the cast and they all benefit from a wonderfully naturalistic script by Anna Jordan. However the standout performance is from the mute Kattrin played by deaf actress Rose Asling-Ellis. “Her heart is a shining star,” and that is evident as we see the world reflected through her eyes in the midst of all the misery. Her performance is just glorious, conveying more than words could possibly express in the smallest of gestures. A scene where action carries on elsewhere, she sits in the van side of stage carefully arranging her hair to cover her scars and every movement is perfection. 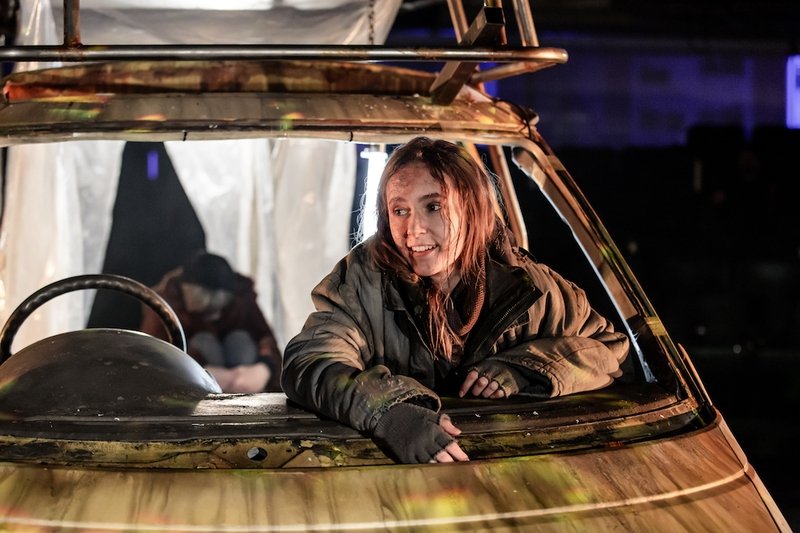 Anna Jordan shifts the action from the 17th century 30 year war to a dystopian future where its 2080 and both Europe and technology have vanished. This is a bleak, barren setting where the red and blue armies fight for space on a grid. With the demise of the E.U. there are no longer emotional connections to countries just a nameless land mass. Striding through this unforgiving setting is the eponymous Mother Courage with her 3 kids – 4 if you factor in her beloved van. Rough hewn cardboard sheets above the stage inform of each scene as do the disparate characters who introduce the action ensuring in true Brechtian fashion that the audience is not misled about what is about to unfold.

The set design by Joanna Scotcher works really effectively. The battered ice cream van is an inspired choice being a welcome reminder of childhood and safer times yet a sinister refuge that is also burger van, provisions cart, brothel and armoury. The course of the war is perfectly reflected as it is gradually stripped back to a skeletal husk. The oil drum effectively serves as podium for Hedydd Dylan’s insouciant whore, and later in the most beautiful scene it burns brightly as Mother Courage has her final poignant moments with Kattrin.

There are issues with this production, mainly the jarring nature of some of the musical numbers which although are intended as discordant often simply just don’t work at all. The musical number prior to Kattrin’s ruin feels really unpleasantly at odds with that scene. Overall this production of Mother Courage is meaty and full of life- which is more than can be said for the bird MC tries to flog to the army chef!! 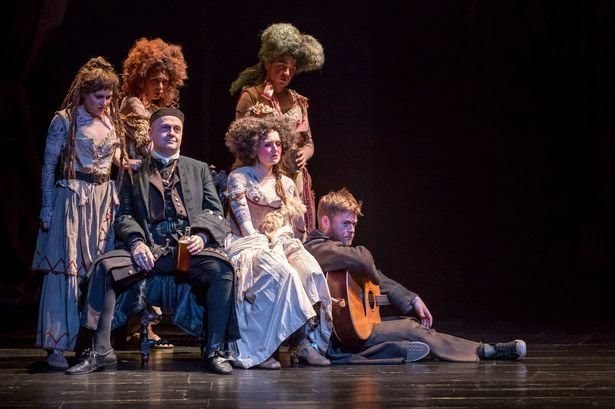 Walking in to this brand new space is a delight. Wall to wall books surround huge tables to eat at and cosy spaces to sprawl in. The space is bright, airy and lively. Here to see the theatre, the rest is an unexpected pleasure; and also includes community meeting spaces, a story telling space for kids and a cinema. The theatre space does not disappoint. Welcoming and cosy it is in 500 seat mode surrounding a large stage, but can alter to accommodate 800.

The glowing candelabras lower and a musician starts to play the harpsichord. A raucous Irishman ruptures the elegant period moment by lunging unto the stage as though stumbling in from the street and so opens The Beggar’s  Opera. Soon the stage starts to fill from all directions and the energy ramps up as Caolan McCarthy’s beggar leads this 18th century ballad opera firmly into 21st century Chester courtesy of  electric guitars and drums etc. The impact is vibrant and eclectic and feels like Vivienne Westwood, Tim Burton and Adam Ant are in the wings feeling delighted with this bawdy party.

Writer Glyn Maxwell  and composer  Harry Blake do a good job creating a modern day relevance to the piece and the audience are warmly receptive to the local references. The vocal performances are mainly strong however there are a few points when it is difficult to grasp all the lyrics particularly when singing en masse seem to blur the clarity of the vocals.

The staging is very effective and the lighting is perfectly atomospheric in every scene. The costumes are a joy and I’m tempted to see if you can check out costumes as well as books at The Storyhouse!

The performances are gutsy, visceral and ribald as befits these raffle taggle blend of thieves, whores and henchmen. Standing out is the earthy honesty of Lucy Lockit the pregnant jailers daughter who shines in the portrayal by Nancy Sullivan and her comic foil is Polly Peachum, the pretty and vacuous ingénue convincingly played by Charlotte Miranda-Smith.

As in the original the menfolk are weak dandies like the Captain or deplorable villains like Peachum and the jailer. The women are no better but their desperate circumstances remind us there are often limited choices in a society built oncapitalist greed and social inequality.

Artistic Director Alex Clifton has launched his programme for The Storyhouse with a bold and familiar tale and ensured that the story resonated with the local community. It is a really promising start in a great space for the largest repertory company aside from The RSC and The National Theatre. This is a promising opening chapter for The Storyhouse.

Leaving the bright and modern theatre on a busy Saturday night was a stark reminder of an unequal society. Passing noisy bars with drunken groups on stag nights and homeless men begging on the cobbles it felt like The Storyhouse performance had left the building and become a promenade performance  through the quaint dark streets of Chester.