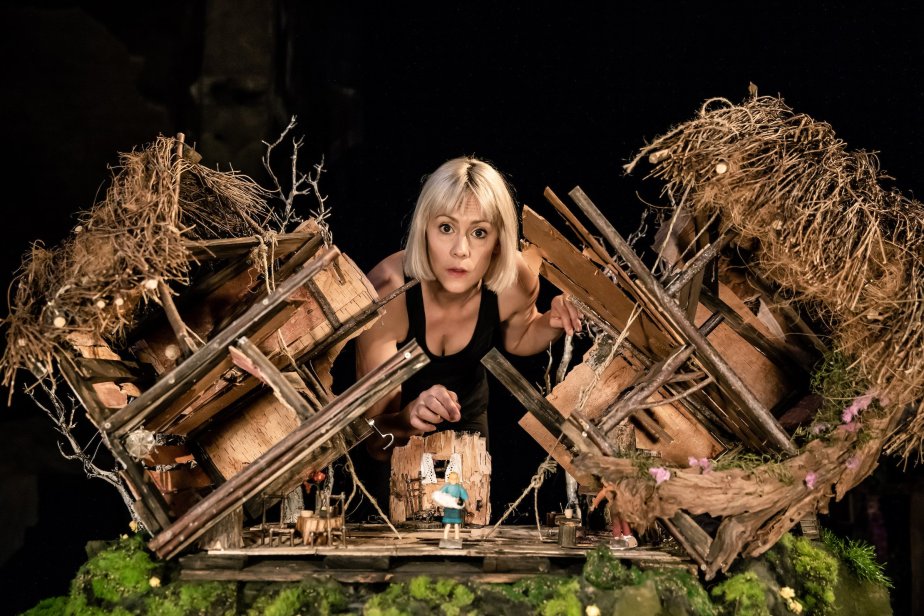 Written and Performed by Bryony Kimmings

I was blown away by I’m a Phoenix, Bitch when I saw it at Edinburgh Fringe in August. Like many of the audience I literally staggered out of that performance like someone had literally tilted my world and walked me through the dark side of a nightmare reality. Thankfully Bryony Kimmings is acutely mindful of her safety and that of her audience. This is a safe space and “new Bryony” has plenty of tools for any possible apocalyptic scenario. It’s time to find the little anchors and rafts that exist amongst all this chaos that will help you…in the future.

This is an autobiographical performance by an artist who has never shied away from painful, personal subject matter. Shows like Sex Idiot, 7 Day Drunk and Fake It ‘Til You Make It have firmly established Kimmings as an important artist. This show explores her experiences in 2015 when she lost her partner, her home, her sanity and almost lost her baby son. The show is structured around her subsequent experience of a Psychotherapy technique called “rewinding” used to help clients confront and deal with past traumas. Using micro sets on stage that recreate various scenarios, Kimmings films herself and these projections cleverly recreate how the mind can be trapped in a memory or experience, and how observing it again can help gain emotional perspective to cope with trauma.

As a self styled “Psychotherapy movie star” Kimmings embraces elements of camp horror schtick, brooding black and white Hitchcock and vivid Lynchian dystopias as she plays out a range of rewinds. We meet the breakfast nymph complete with a full English and the requisite vicious metal man trap. We see a girlish Bryony playing house as she plays out the fairytale complete with miniature Oxfordshire cottage with wisteria on the outside and lashings of Farrow and Bell on the inside. There is a high achieving Mum-to-be in billowing kaftan bingeing on NCT classes and natural childbirth. As each scene is unveiled Kimmings is transformed with wigs and makeup while in between there is a sharp contrast as the new Bryony breaks the fourth wall red haired and clad in black gym clothes. This Bryony makes recordings for her son Frank in the hope he will understand their journey whilst also battling a harsh leaking, creeping inner monologue that frequently attempts to derail her hard fought for sanity and confidence as a mother.

Visually this production is both bleak and yet utterly gorgeous. This is dark subject matter but Kimmings has a lightness of touch and a real natural warmth that is always engaging. The projections give this show a magical realism especially when she steps into the projection itself. The utter poignancy of a grief crazed mother frantically burying the unbearable reminders of the future she had imagined for her child seem not crazy or remotely like giving up on her son. Like a Phoenix this is a mother preparing to be a mother to a “new” baby Frank.

This is a harrowing journey into post-partum psychosis, PSTD, and a parent’s nightmare experience of seeing their baby become critically ill with a cruel and damaging health condition. This is no blissed out paradise model and there is no happy ending to this story but there is a statement of hope to sustain us all in the real world. This is an important performance to witness as what audience members hopefully take away is a permission to see psychotherapy or counselling as an option to support them if ever confronted with their own personal apocalypse. Bryony can now see her horrific experiences in 2015 as just bad luck. Her fears for her baby did not make anything bad happen. Many parents fear for their children as a natural built in instinct for their survival, in post-partum psychosis those fears are hideously magnified. We can all prepare for the worst. For Bryony her fears were realised but thankfully she has risen like a Phoenix and although battle scared, both her and her loved ones have survived.

Images by The Other Richard