This play is a genius idea by Kemp Powers. One Night in Miami literally locks the audience into Room 12 of a Miami motel on February 25th 1964. We watch 4 old friends chat about politics and life as they celebrate the success of the new World Heavyweight Boxing Champion. It’s quite a night to behold as the four friends are King of the World boxer Cassius Clay, soul singer Sam Cooke, NFL supremo Jim Brown and political activist Malcolm X. We are flies on the wall watching and listening, as are the FBI and the Nation of Islam while outside amongst the palm trees the Press are also gathering. There is only Joe Brown left alive to say exactly what did transpire that night, but Kemp has created something that feels authentic. Offering a glimpse of these men in the midst of private struggles and uncertainty that are played out alongside the thrills of public success and the darker themes of repression and segregation in Sixties America.

Designer Grace Smart has created a capsule motel room that effectively boxes in the four men as they talk privately but also works wonderfully well in recreating a boxing ring and an Auditorium stage. Lighting design by Ciarán Cunningham and sound by Max Pappenheim enhance the experience and help create the standout moments such as the boxing scene and when Sam Cooke sings. The neon sky and palm trees vividly contrast against the plain decor of the motel room, creating a perfect backdrop to the ordinary and extraordinary events unfolding in that room. 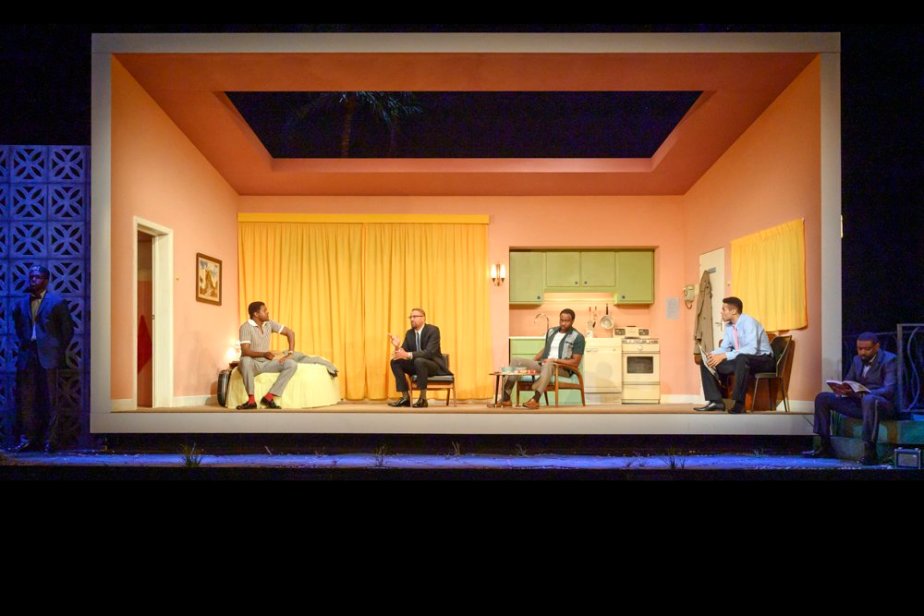 The characters on stage are vividly portrayed by the cast with fervour and passion. At times they are so full of life that the dialogue risks them becoming caricatures of themselves. Conor Glean as Cassius fizzes with energy, giddy with his success but increasingly wary of what his imminent conversion to Islam will mean. Miles Yekinni brings depth and strength as Brown as he contemplates a move from sport to the movies as a “Black action hero”. Christopher Colquhoun is convincing as the impassioned activist who clearly carries a heavy burden and is wrestling his own fears and demons.

The standout performance is Matt Henry as Sam Cooke who moves between confidence and assured charm and his fear of what may happen to his hard won success if he does indeed change his style and use his music to do more than just entertain. I would happily pay again just for the moments when he performs – he brings down the house as he brings his “Sister Flute” to his explosive rendition of You Send Me. As the play draws to a close and he tries out his new song A Change Is Gonna Come, Henry is simply sublime. Director Matthew Xia creates a moment when it truly feels like witnessing something intensely personal and genuinely moving as though we too are hearing this musical masterpiece for the very first time.