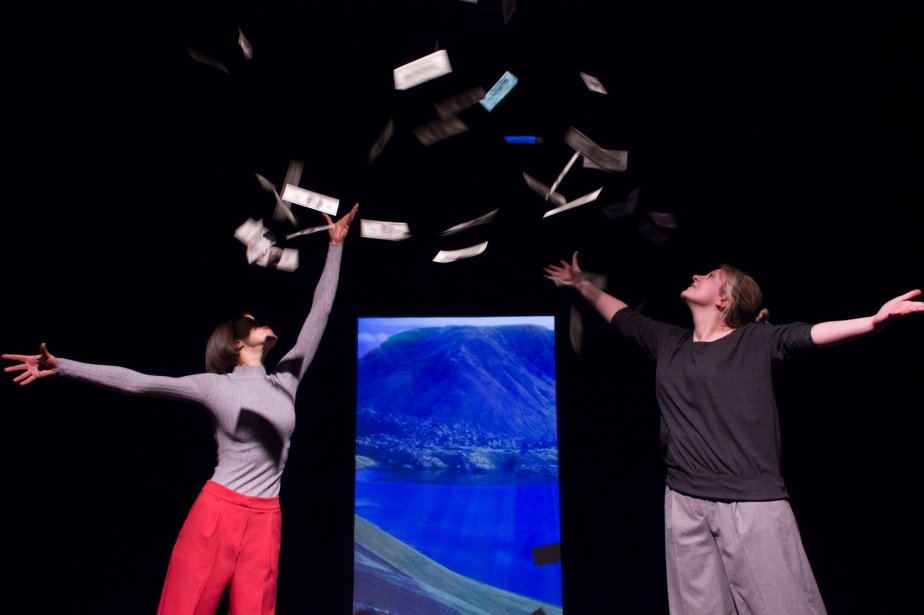 This is the follow up to Proto-type’s last work dissecting contemporary politics. A Machine they’re secretly Building delved into the world of surveillance, whereas The Audit is a razor sharp analysis of the 2008 global financial crisis, viewed as the worst since The Great Depression of 1933. Sharply observed and clever this show feels like part theatre/part podcast/ part Jackanory for grown ups. A heartfelt and thought provoking plea to wake up and look at what is going on around us. An invitation to react and respond rather than just remain ignorant and accepting.

Rachel Baynton and Gillian Lees are a great combination and perfect foil for each other. Together they deftly create a strong emotional response evoking shock, anger and clarity around the facts while also subtly provoking awareness of our own acquiescence and willingness to be nurtured towards a false sense of security.

The performance includes original writing that contains some beautiful spoken word and deftly, measured performance, blended with emotive new music and film. Taking the audience from The Great Depression of 1933 to Bill Clinton signing off on deregulating the financial industry in 1999. The subsequent buying up of mortgage bundles that were not always secure, the false assurances to guarantee insurance cover from titans like A.I.G and the assumption that the housing market would continue to boom and the crazed greed of the banks sounds so wildly speculative that it beggars belief that it was allowed to happen. It did.

The Audit focuses on the ordinary people of Iceland, a country that made it’s first radio contact with the world in 1906. It is not a happy story. It is a horror story. Not a nice story. The global crash of 2007/08 left banks such as Lehmans with 619 billion dollar debt, led to the first run on British banks in 150 years and of course crippled Iceland whose three biggest private banks all defaulted with catastrophic consequences. The public protests in Iceland brought down the government and led to the creation of a new Constitutional Assembly which pledged that the country’s resources should belong to the people rather than a select few. Iceland has made a strong economic recovery in the past 10 years.

This probably sounds rather dry and heavy going. The brilliance of Proto-type’s approach is to engage, inform and entertain. I wish our education system made these two women the Trinny and Susannah of make overs in how we educate and inform our young people. They are not preachy but they are passionate. They are never dry and boring but they exude warmth and wit. The clarity and insight here allows for the telling of a modern horror story of greed that resonates with age old folk stories that we should not forget.

The Audit is a chilling and telling reminder of what happens when we forget the lessons of the past and sleep walk through our lives dumbing down and silencing the questions our gut instincts are screaming at us. When the storm is coming what do we do? What can we do? What is possible if we stand together?

Take your pots, take your pans. Bang them! Make the World move…