HOME in partnership with Manchester Camerata present Lahore to Longsight as part of the Upclose series. This will be a multi-media realisation of the cult album by Aziz Ibrahim about his father’s journey to Britain after Partition; and will also feature Dalbir Singh Rattan (tabla).

Sitting in the bar at HOME with Aziz Ibrahim, we start off chatting about the famous C18th Scottish map maker Colin MacKenzie who had one of the largest Indian artefact collections in the world. This leads to conversation about the impact of The East India Company on the history of the British Empire and Aziz’s involvement with his old friend Dalbir Singh Rattan on an Arts Council project in Stornaway about 70 years of Partition. Several hours and a parking ticket later I know a lot more about a Pakistani Muslim from Longsight who has toured the world with artists such as The Stone Roses and Simply Red, collaborated with artists like Paul Weller and Mike Joyce (The Smiths) but who is equally happy playing guitar in a prison or a hospice. A guy who may love basketball more than music and who once played The Star Spangled Banner during a boxing match between The Staffordshire police and the N.Y.P.D. despite having been refused a visa to enter the U.S.A.

Was history always a big interest?

I was interested in history at school but I didn’t feel a connection as it was a very one sided history from an English perspective; later on I realised the history of this “wonderful” Empire was filled with blood, trauma and slavery.

The whole principle of identity and how we identify ourselves as being that culture, this religion, that city was actually brought about by The East India Company and The British Empire. Divide and Rule has segregated communities for centuries, made us feel a certain way about culture, religion and gender. Prior to colonialism people had fuzzy borders. Indians lived next to Muslims, next to Sufi. We are still perpetuating principles that were used to kept us apart. It happened to South Asians, Africans, Chinese, The Irish and Celtic communities. I’m looking at music as in how does music bring people together.

Growing up in Northern Ireland there was a lot of segregation. In school we were taught different histories, cultures and music depending on religion. Being asked your name could define how you were treated.

I’ve been refused visas because of my name.

You missed out on a big world tour because of that, didn’t you?

Yes. My whole life changed. The knock on  effect- so many things happened after that like a domino effect- many things fell apart.

Do you think being refused a visa shook your sense of your own identity?

It shook something!!! It made me question what is identity. Why are people identified in this way? Being perceived in a different way made me ask more questions. Why do I think in this way? I have dual heritage in that my parents came over here and I’m a Mancunian born Muslim who lived in an inner city council estate. I like to draw on all the strengths of different cultures and communities. Music is the key through which I communicate with people.

Maybe with a curious mind comes openness to different things…outlooks?

Oh yeah, I’m definitely curious. I’m intrigued how I get ideas from different cultures, personalities, instruments – like  how they’re played then trying to mimic them on guitar to create a new voice. I’ve always thought about individual voices, our uniqueness. How do you express that in any art form? My way was incorporating other voices into the guitar. Then I became a lyricist inspired by my father and the stories he told me about India, Pakistan and Britain. Train journeys, the jungle, his army training…..hence how Lahore to Longsight came about.

What age were your parents when they left Lahore?

I dunno, they don’t know. There was no formal record keeping in the villages. My father estimated his age when he applied for the army. He was about 86 when he passed away in 2006.

So he had a long history in India before he left after Partition?

He had a long life in India. That begs the question – Am I actually Indian, am I Pakistani, what am I?

So how did this collaboration with Manchester Camerata come about?

I was introduced to them my mate Mike Joyce from The Smiths. Mike and I have a group together which we started just playing for fun- it involves spoken word, narrative, visual art – called Azmik.

I told them about my philosophy of music and what I’m doing. They were thinking about a Reimagining India project for the 70 years of Independence and asked if I was interested in collaboration. It came out of the blue.

Absolutely. I suggested the concept behind the album which is a partition story. A personal story about my father, a simple person from Indian roots, the story of how we lost family during Partition and resettling in Pakistan. It reflects how life was for a generation of people who went through such a traumatic experience and didn’t speak of it, who didn’t have a platform or a voice to be able to tell their story. It is not about finger pointing- my Mother always said, ” When you point a finger, there are three more pointing back at you.”

They are a contemporary, forward thinking orchestra. I like working and arranging with Tim Crooks (Arranger and Conductor) – he is very quick, efficient, creative. I’m aiming towards involving the orchestra in my music, exploring how we interact- not just telling them which parts to play. I’m testing them and they are testing me so it’s a sharing process. I don’t want them to be confined to the notes on a score sheet. I want them to feel they can improvise.

So you basically want to create a jamming session with an orchestra?

When two very different perspectives come together how do they work together? Like a marriage- you don’t want to be exactly alike and like the same things. That’s boring. I like the difference of opinion and perspective. Different contributions bring about new things.

The Camerata and you seem like a very natural fit. They work on projects based around mental health and dementia, and you are involved in a wide range of community projects. 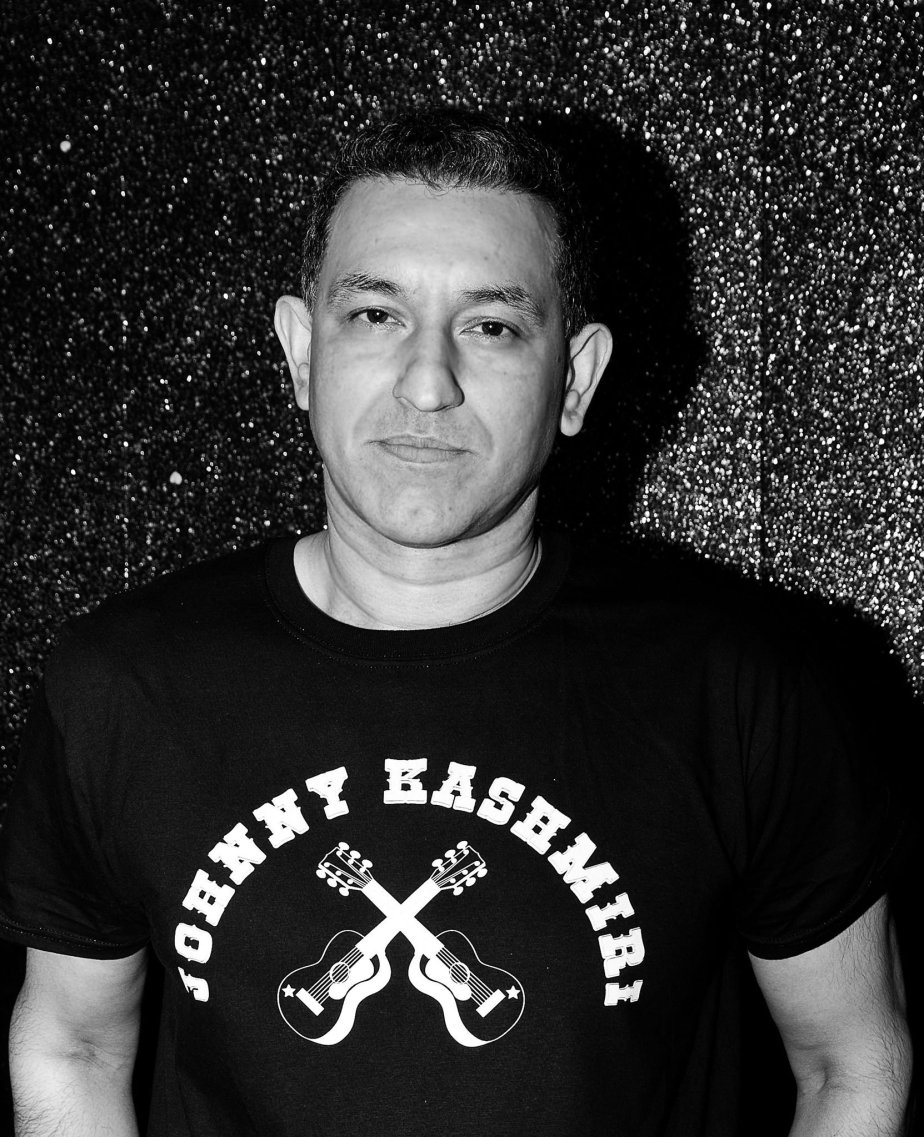 It’s that relationship with music and other arts. The government can withdraw funding from the Arts like it is less important than other areas of investment. I think when times are tough people rely upon the Arts to lift their spirits. It’s about engaging with people not preaching at them, and giving opportunities on an equal footing. For instance allowing a hurt child to express in music what they can’t in words. Giving young third and fourth generation South Asians respect- engaging in what interests them, asking what do they want?

Working in prisons, hospices, special needs schools and with Crisis, has made me think music is key in mental health. It is more important for people to engage and express themselves than have the correct notes. That beautiful freedom of expression and positivity even when it has maybe started from a negative place.

What do you want people to take away from this event at HOME?

That anything is possible. I’m a British Pakistani Muslim from Longsight, from a really poor family yet my journey has been so exciting. If it can happen for me it can happen for anyone. As long as you try there is always the possibility of change. The only way humanity succeeds is through perseverance. I think if HOME and Camerata can continue to develop projects like this more young people from the inner city will come through the doors of HOME etc.

Will you have family at the gig?

For the first time since 1987 my Mum is coming – she came to GMex for Simply Red and never came again!

My brothers Ejaz and Abdul are performing with me as special guests. Its nice to have them participate as they are part of this story.

Which instruments do they play?

They play guitar and Abdul, my older brother plays all sorts of instruments – he’s on Ian Brown’s My Star – not many people even know that!

My parents came from poor villages and worked hard their whole lives. They motivated us all to achieve academically. I wanted to be a doctor but music chose me and Simply Red offered me a career.

What do think  your Mum will be thinking?

Get a proper job!!

This will be the first time she hears something that relates to a husband she lost in 2006. It’s honouring him. I also wanted to do this concert so she feels happy about my father’s contribution. How much we cared about him. What he did for me when I could easily have been running with gangs. Their guidance and nurturing – it’s honouring someone’s love and commitment.

That’s a life well lived, isn’t it? You have to create that. It didn’t just happen.

So what is next for you?

I hope this leads to further work with orchestras. I like the idea of creating film scores like South Asian composers like A.R. Rahman and Adi Burman. I’ve got an Arts Council grant to explore music and identity and the use of digital orientated projects  called PROJECT 70 ASIAN BLUES. It is about accessing new audiences using new tools and my mentors NAE (New Art Exchange) and people like Dave Moutray from HOME have been very supportive.

I wanted to do projects like this just so I might widen that door, so maybe others follow what I’m doing and see there are opportunities for them too. They can be younger, more talented, better looking. I want them to see they could achieve more than I could. If HOME and Camerata  are listening then others will follow.